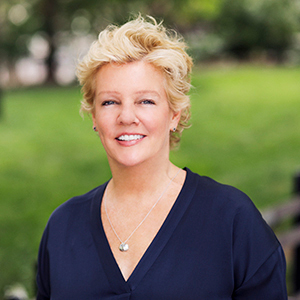 Janet Wilkinson is a seasoned professional who brought 30 years of Wall Street experience with her when she joined the real estate industry in 2010. For 18 of her 30 years with Bankers Trust/Deutsche Bank, Janet was a senior member of the High Yield Sales and Trading Desk. She knows how to put a deal together. With a solid work ethic, Janet enjoyed a seamless transition into her real estate career. Her contagious enthusiasm and sincere love for real estate and working with people enable her to go from one deal to the next. Janet has created a niche for herself in bringing high-end service to every client and every customer. Janet believes in keeping it simple: "We treat people the way we would like to be treated, from the start of the deal to the closing table. It's not that complicated."
Janet believes there is no better city in the world than NYC, and working in the real estate industry in Manhattan is her dream come true. Her entry into real estate began in 2010 when she associated herself with Corcoran and won the Rookie of The Year Award. As Janet puts it, "at the end of my first year in real estate, I knew I wanted to build a business from the ground up; I welcomed this challenge." She also knew that an entrepreneurial path after Wall Street was an important next step for her. In search of the perfect affiliation, Compass provided what she was looking for. She tells us that the Compass business model is unique and the perfect fit for the team. Janet says, "Compass offers us cutting edge technology which can be the difference between good customer service and fabulous customer service." She has tremendous focus and believes in follow-through. She says, "Without follow-up and follow-through, you can't survive in this business. Our job is to help people reach their real estate goals. End of story." After talking with Janet we can understand why the Wilkinson LeFevre Team is enjoying great success.
Janet holds a degree in Finance from Pace University in New York City. She was born on Long Island and has lived in New York City for the past 30 years. With her wife and business partner, Susan, and their two pups, Nikki and Bella, Janet calls the Upper West Side home.

”We had interviewed a lot of agents but decided on Janet, Susan and Allison because they believed in us, our apartment and felt they get the best price. They didn’t disappoint, because they were fantastic from start to finish. They kept us informed throughout the whole sale process, followed up with the board on the buyers package and patiently answered all our questions. They also provided an excellent online marketing campaign for the apartment including print materials (we loved how well the pictures and floor plan came out). With their Wall Street experience behind them there are no better negotiators to have in your corner whether your buying or selling. Would we work with them again? ABSOLUTELY!”

"In 2016 we hired the Wilkinson LeFevre Team (Janet Wilkinson and Susan LeFevre) as agents to manage the sale of our coop apartment at The Normandy on Riverside Drive. They guided us in staging our apartment to maximum effect. It only took the Wilkinson LeFevre Team ten days to sell our apartment and at a price with which we were fully satisfied. But their work did not stop then. They remained fully involved in the process, making sure that the prospective buyers had a solid Board package which was submitted quickly; that the buyers were prepared for their Board interview; and, once approved by the Board, that the buyers moved through the closing in a timely manner. Over all, Janet Wilkinson and Susan LeFevre are superb real estate agents, with outstanding judgment and skill. They also happen to be really nice people as well. We are delighted that they represented us; and we would recommend them without reservation." – Bennett Lincoff

"When I thought of the possibility of hiring Janet as my broker I hesitated at first since I knew that she was representing the seller. I am happy to say that Janet was professional, understood both sides of the negotiation and worked hard to bring the deal to closure where both the seller and I were happy with the final terms of the sale. Janet made me very comfortable since she displayed a deep knowledge of the real estate market in NY. She also was upfront, and made it very clear to me the challenges I would be facing buying an un-renovated, pre-war apartment. The purchase of my apartment was a huge commitment on my part and Janet”s involvement made me comfortable with the transaction and the prospects of making PHB my home. I am very pleased with my experience with Janet and would recommend her to others. I was especially impressed by the way she skillfully handled her role as both buyer/seller agent and the integrity and professionalism she displayed throughout the entire purchase process." - Francesco Rocciolo

"My husband and I tried to sell our apartment a couple of times but were continually met with difficulty in terms of finding a qualified buyer. We met Janet and Susan while they were marketing the sale of our neighbor’s home—Apartment 14A across the hall from us. We invited them over to talk about listing our apartment. They spent a good deal of time talking to us about how they pursue the listing process and we immediately wanted them to take over our property listing. We went on the market just like everyone else seems to do but something was different. We now had two very educated and focused people calling us all the time and giving us feedback about what was happening. We were part of all discussions and felt completely safe in their hands. We finally felt like we were getting somewhere! We closed on our property last week and we would not have been at this joyful place without the Wilkinson LeFevre team on our side. They are nice, solid people and we enjoy knowing them." – Carol and Bill Stack

"Janet Wilkinson and Susan LeFevre of Keller Williams set a standard of excellence that stands above the competition." – Kenneth J. Kleinrock & Bruce Lloyd

"I met Janet and Susan at an open house in 2014. I liked them both immediately. I chose them as the team to work with to sell my apartment in Greenwich Village and to search for a new apartment on the Upper West Side. Working with them was a pleasure. They are very experienced in the New York market and helped me achieve my goals. There was a lot to stay on top of. They supported me through all the paperwork and all that the process of selling and buying simultaneously entails.
Once I closed on my purchase, they helped me with my renovation and recommended good solid people to meet with. I have spent a lot of time with Janet and Susan and I appreciate their guidance, professionalism, and insight. They have become friends and I would definitely recommend working with them—you will not be disappointed!" – Gail W.

"At the recommendation of a colleague, I took a meeting with Janet Wilkinson and Susan LeFevre to discuss NYC real estate. They show up at my office, they talk about neighborhoods, amenities, attributes, shortcomings and anything else a true novice would need to know. I thank them for coming and advise, as I am getting ready to show them the door, that the likelihood of our going forward with such a purchase was virtually zero. Their seemingly perfectly coordinated response was no worries whatsoever, let’s just have some fun and see what the market has to offer. No pressure, no stress, just “fun”. So the fun began. Before long , real estate aside, we became fast friends. Price negotiation and strategy, lawyer referral, contract, board application, and relationship with the sellers and their broker all handled flawlessly!! No detail missed and no surprises. Executed so well that the seller’s agent, who has been in the business for seemingly 100 years, advised me that we have the “best brokers she has ever come by”; no lie. Long story short, my wife and I are over the moon happy as we closed on the purchase of the perfect coop apartment on Central Park West. We consider ourselves quite fortunate to have met and worked with Janet and Susan. We have referred them to others and will continue to do so. Particularly to those unsuspecting friends who think they will never own a place in the Big Apple." – Fred and Eileen Springer

"I had the pleasure of working with Janet for the purchase of my apartment at 336 West End Avenue. Janet is all about customer service, professionalism and efficiency. Her attention to detail is impeccable. She leaves no stone unturned and anticipates any potential scenario a customer may be faced with. This makes for a trusting and transparent relationship which is exactly what I required." – Valerie Lavion