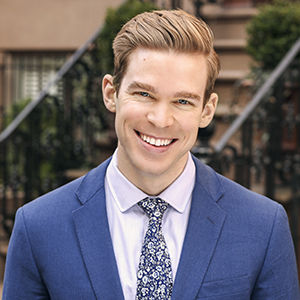 John is an accomplished professional known for his tireless work ethic and strong sense of humor. He prides himself on providing a customized and assertively hospitable approach to executing the best possible transaction on his clients' behalf.

A native Tennesseean, John grew up on a farm about an hour north of Nashville with chickens, cows, corn, wheat, and soybeans. It was there he learned to care for and value other people with the respect each person deserves. Confident, focussed, and persistent, John is now a seasoned New Yorker with finely-tuned customer service skills and an impressive roster of clients he has fostered in his time in the city.

Apart from real estate, John is most passionate about volunteering and travel. He has worked with various non-profits in New York and throughout the country to help give back to a world by which he's been so blessed. He worked in his hometown of Clarksville, TN to raise funds and relocate a soup kitchen's storage facility and receive his Eagle Scout award. His last travel destination was Cancun, Mexico. He insists that he's more interesting than that, but there was a great deal on Groupon. When not serving his clients, John is an active New Yorker: he lifts weights every weekday morning, meditates daily, and attends Unity of New York on the Upper West Side every Sunday. He's also a self-proclaimed Scrabble fanatic. On the weekends, he likes to stay in Brooklyn and eat a late brunch at his favorite restaurant "Hello Bklyn".