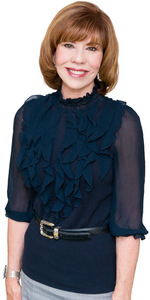 Leigh is a 30-year plus veteran of Peninsula real estate. Her experience in residential sales began in 1986 with Fox and Carskadon specializing in Peninsula sales, followed by 12 successful years with Coldwell Banker where she consistently ranked among the company’s elite top 10 sales associates. In 1995 she received the first “Sammy” award from the San Mateo Count Association of Realtors for selling the most homes in the county.

In 2002, she transitioned to management when she became the leader of Coldwell Banker’s Burlingame office as their managing broker. In her time there she grew the office to 100 sales associates while mentoring and training some of the Peninsula's finest professionals. She retired from active management in December 2015.

Leigh is originally from New York and has lived in many parts of the U.S. and abroad. She was educated in England and also lived in Helsinki, Finland for a year. Prior to entering real estate, Leigh was a professional figure skater who enjoyed a coaching career that took her all over the world. She is a United States gold medalist and a master rated coach. Leigh and her husband Douglas are licensed private pilots and fly their own Beechcraft Bonanza. In their spare time they enjoy flying to their second home near Yosemite.