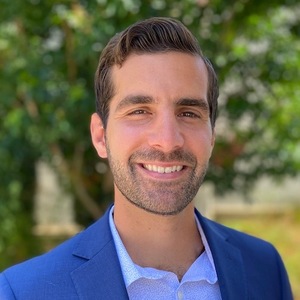 Russ is a natural athlete, he is competitive and ambitious in striving toward his goals. He was named the #1 Wide Receiver in Orange County, and continued on to play two years of College Football as captain of the team. Before deciding to pursue a career in the NFL, he suffered a career-ending injury that changed the course of his life. Russ was then lead to a life in ministry.

Leaving the world behind, Russ entered St. Michael's Monastery where he completed a degree in Philosophy and Theology. After five years, he made the decision to leave. In 2019, Russ married the love of his life and in the summer of 2020, they welcomed their first born son into their lives.

In going on his third year as a high school educator and coach, Russ is well equipped with communication skills, building and maintaining relationships, and always treating others with a personalistic approach.

In strategic partnership with the Aaron Kirman Group (AKG), led by Aaron Kirman who has consistently been named as one of the top agents in the world, AKG is the #1 Compass Team in America and #1 Group in Los Angeles with over $6 Billion in sales. AKG also leads the hit CNBC show "Listing Impossible".