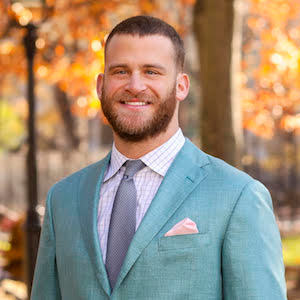 "A Foothold in the City" - NY Times

"INTERVIEW: Philip Scheinfeld on the Manhattan residential market"
About Philip
Tattooed on Philip Scheinfeld’s arm are the words persistence always beats resistance. It’s a mantra that the New York City native has maintained in his personal life as well as professional. As one of the top leaders in the NYC luxury real estate market, Philip Scheinfeld has persistently climbed to the upper echelon of luxury brokerage, with minimal resistance.

There was a time when this all might have never happened. Philip was a student at Pace University, on track to develop an app and ultimately leave school to pursue a start-up company full-time. Some wise words from his father changed his mind. “My Dad sat me down and said, Phil you can start this app and raise money or you can find something else and finish school,” he remembers. He graduated with a degree in Business Management and sought to embark on a career that spoke to something he was actively fluent in: the New York City lifestyle.

Growing up in New York’s Upper East Side, Philip navigated through 24 years of neighborhoods and boroughs at the time. He lived life in the fast lane and moved past it, yet still knows how to sell it. A friend appeared on a real estate reality series and suddenly it all clicked. Now 29, Philip Scheinfeld has made a name for himself by working to introduce others to the lifestyle he’s been living his entire life. “I got my real estate license and never looked back,” he says.

Philip started with a small firm and quickly rose up the ranks as a top seller. He then worked for a top-ranking team at Douglas Elliman for two years before joining Compass and forming a winning team alongside a fellow top agent. In 2019, Philip moved to start his own team, complete with offices in both New York City and Miami as well as a reach to other luxury markets like the Hamptons and Los Angeles. In the last two years alone, Philip Scheinfeld has brokered in excess of $200 million in sales. His range has varied from Greenwich Village townhouses to co-ops along Fifth Avenue to even the coveted penthouse of Flatiron’s Jade NYC. But for Philip, it’s much more than simply showing a home and selling it; there’s a story to reveal and an idyllic way to tell it.

From utilizing top photographers and videographers, to developing new creative marketing strategies which include strong social media pushes, Philip Scheinfeld isn’t your run of the mill realtor. “There’s a lot that the more established broker isn’t as familiar with,” he adds, “and that’s something I certainly excel at.” Architects, attorneys, designers—everyone in his rolodex contributes to seamless transactions, as the end goal is to have every client level up with each residential experience. In a sea of nearly 10,000 listings, it’s difficult not to drown, but Philip knows how to stay afloat. “You have seconds to grab someone’s attention for someone to actually click on a listing,” he expresses. “There is a lot of thoughtfulness that goes into my work. I think that’s 50% of the job.”

Above all, Philip Scheinfeld understands the dream he is bringing to clients, as it’s been his own story from the start. “You want someone to tell that story to the perspective buyer and fall in love with that story and make it their own,” he says. He’s giving people an opportunity to live their best lives, because he’s undoubtedly living his.
Spotlight

A collection of fifty-four contemporary residences, 570 Broome, draws inspiration from the history and style of West SoHo. From acclaimed architect Tahir Demircioglu, with impeccable interiors by Skidmore, Owings and Merrill, the design references the area's industrial past via soaring ceiling heights and a silhouette evocative of staggered cubes.

PHB is a full floor residence on the 25th floor overlooking beautiful and iconic visual treasures from every window. Sweeping cinematic views grace every room, from the Hudson River, south to One World Trade and all points north with the Empire State Building a glowing beacon at night. Enter the home via the key-lock elevator to a private entry gallery leading to the beautiful Great Room. With ceilings nearly 11 feet tall, the immediate dramatic effect of this 3 bedroom, 3 bath 1,943 SF home is wonderful for entertaining. 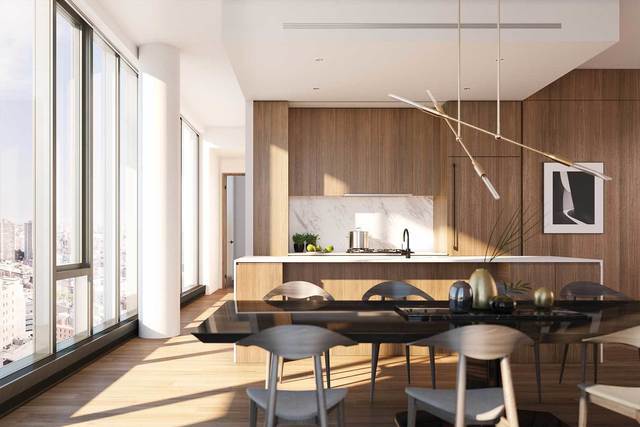 Now on the market for the first time in 20 years- "The Crossroads," a Greenwich landmark. This elegant 6 bedroom, 5,690 square foot stone and shingle Victorian set on 1.63 level acres overlooking the Greenwich Country Club's golf course marries yesterday's charm with modern conveniences. This impeccably maintained home features high ceilings, exquisite architectural detail and a layout with great flow. Gracious entrance hall opens to a sunlit living room with herringbone hardwood floors, fireplace and bay window. The warm library with built-ins and fireplace leads to a stunning, spacious, three-exposure sunroom perfect for entertaining with a door to the terrace where you can take your gathering outside. The formal dining room with adjoining Butler's Pantry, has a bay window seat, paneling and distinguished fireplace. The gourmet dine-in kitchen with skylight, stainless steel appliances and breakfast area opens to a mud room and a family room with wet bar, fireplace and built-in desk. Second level features a luxurious master suite with fireplace and sitting area or office, bay window, 2 closets and master bath with shower stall. Completing the second level are 3 additional double bedrooms, each with 2 closets and 1 with a fireplace. Third level offers two more spacious double bedrooms and room for an office or playroom. Lower level features a wine cellar with space for 1000+ bottles and a wine-tasting area, a separate entrance perfect for deliveries, and ample storage. Extra room in the lower level could be gym or playroom. Detached three-car garage currently has one bay converted to a gym and room for two cars. Garage could easily be converted back to provide space for 3 cars. Conveniently located near schools and town. 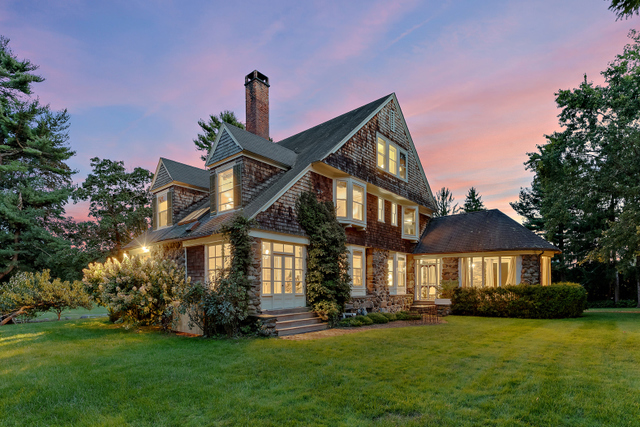