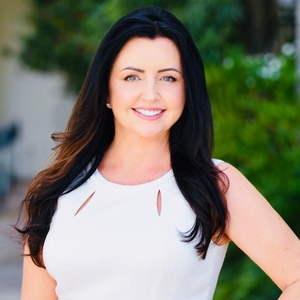 Evie is a Las Olas resident, an Equestrian enthusiast, and a dog lover of her Goldendoodle, Murphy. She was born and raised in Ireland, and her career began in the hospitality industry in a 16th-century castle with one of the leading hotel groups in Ireland, training and learning the importance of exceptional customer service. From there, she moved to the Channel Islands, where she worked for Christian Dior, another luxury branded company. Her sales and people skills helped her to quickly move up the ladder, where she earned the third salesperson position in all of Europe for the company at the age of 22.

When Evie moved to the United States in 1995, she began her real estate career and was very fortunate from the beginning. Evie has achieved many awards, including the president's club and president's elite awards, ranking her among the top 2% of realtors nationwide. Throughout Evie's real estate career, she has done land acquisition and development, overseen and managed new construction builds, and built her own home. She offers a wide knowledge of real estate, knowing every area in Fort Lauderdale, and has sold hundreds of single-family homes and condominiums. Evie knows the most important thing is to make sure one has a good, solid investment.

Putting a deal together is where Evie shines: she is good at communicating, has exceptionally good negotiating skills, and possesses the know-how to take the transaction to fruition. Throughout her entire working life, Evie has worked with the public. Working for leading luxury brands has created the perfect foundation, enabling her to determine the needs and wants of each person while delivering the goods to make all real estate transactions painless, fun and pleasurable throughout the entire process.