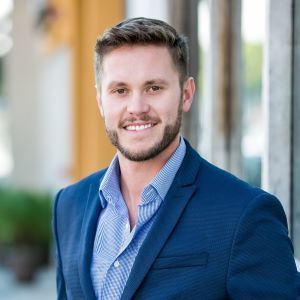 About Alex
Hailing from the East Coast, Alex obtained a Bachelors Degree in Finance and Wealth Management from Coastal Carolina University. He then relocated to California where his interest in architectural design provoked his desire to pursue a career in real estate. Prior to working with Sabine, Alex was an assistant to Michael Springer, where he worked on both the buying and selling side as well as a number of commercial deals, obtaining a multifaceted understanding of all aspects of a real estate transaction. In 2016, Alex joined Sabine Gebser’s team, where his ability to remain composed and even-keeled under pressure has made him an invaluable asset.

Being born and raised in rural Vermont had a direct influence on Alex’s love and enthusiasm for the outdoors. Whether solo or with friends, he enjoys almost any activity that nature can provide such as biking, snowboarding, or lounging in his hammock up in the mountains. His infectious smile and outgoing energy continue to bring a positive vibe to the office, their clients, and the world of real estate.