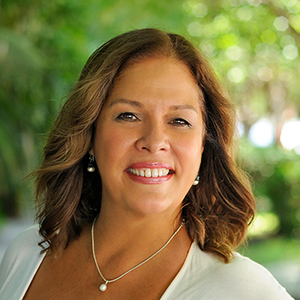 Originally from Caracas, Venezuela, Daisy Bilbao was fortunate enough to spend her youth in several different international locations. From growing up in Toronto, attending boarding school in Switzerland, and studying at a university in the San Francisco area, Daisy has a wealth of international educational experience that has provided her with a strong background for business in Miami.
For close to 20 years, Daisy has specialized in pre-construction and new development real estate transactions in the South Florida area. She got her start in the business in 1999, and quickly became a valuable advisor for her diverse clientele. As one of the first agents in her organization to be asked to take over new development accounts, Daisy has been consistently recognized as a leader and achiever from the early stages of her career. She consistently excels at bringing together a client’s wish and turning it into a reality, and has found great success in assisting her clients in overcoming obstacles and negotiating the best result for each unique transaction. Her current territory is vast and covers many new developments from South Miami to Weston.
Over the course of Daisy’s years of experience, she has earned many high-level industry awards. She is a Sapphire Top Producer, and also consistently ranks in the Chairman’s Club for sales of $1.5 million to $25 million annually. Her successful approach incorporates her diverse experience and enthusiasm for her industry, along with her strong determination and professional integrity.
As someone with an extensive international background, Daisy has mastered the art of conversations in English, Spanish, and has a strong command of French, and Italian. She studied industrial psychology and business administration and earned her degree at the College of Notre Dame in Belmont, California. Daisy enjoys being social and dancing, especially in the Zumba classes taught by her daughter. She is also active in the Association for the Help of Venezuela, where she donates her efforts to the relief of her home country.