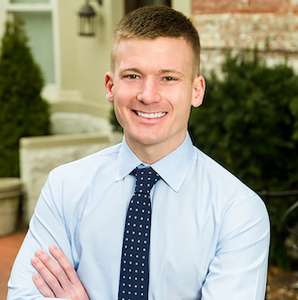 Realtor®
dj@compass.com
M: 207-739-0217
O: 202-448-9002
About DJ
DJ Gerrish is the newest member of the Chauvin House Team. Originally from Maine, DJ moved to DC in 2011 to work as an aide on Capitol Hill. After realizing the political life wasn’t for him, he left town for a brief stint in LA, then returned to Washington to be closer to home. While searching for just the right career path, he met Patrick Chauvin who convinced him to give real estate a try. With Patrick and Brad House as mentors, DJ is now learning the trade from two of the best in the business. “It’s not often you find people so successful in their field who are willing to take you under their wing,” he says. “It was an unbelievable opportunity."

With all three men sharing similar business philosophies, the partnership has been a great fit from the start. “Our customer service is very personal,” says DJ. “We take a lot of pride in the relationships we build with our clients.” If DJ looks familiar, it’s quite possible you’ve taken one of his popular classes at SoulCycle, where he also works as a full-time instructor. He says his two jobs are surprisingly similar. “It’s all about making connections,” he says. “At SoulCycle I build relationships, respect and trust, and that’s what people should also expect from someone who is helping them buy a home.” DJ spends most of his time working and working out, but when he’s not doing either, he says he’s likely at home tending to his plants or watching reruns of The Office.