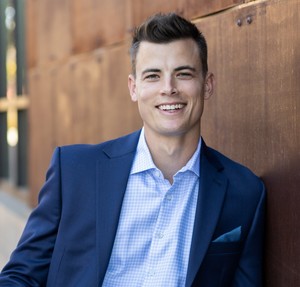 About Hutton
Hutton Moyer has moved over 60 different times in his life. He’s lived in states as different as Florida and Indiana, Pennsylvania and California, Colorado and Alabama, and cities as distinct as Baltimore and Dallas, St. Louis and Provo, South Bend and Rochester. He likes to think his father, former MLB pitcher Jamie Moyer, imparted two lessons learned from a lifetime on the road: the importance of home and a love of baseball.

A former professional ball player himself, Hutton played short stop for the Anaheim Angels after being drafted out of Pepperdine University where he played collegiately. Hutton attributes much of the qualities that make him a successful realtor – patience, tenacity, and hard work – to his time in the major leagues.

Wanting a more settled life for his daughter and wife, Hutton transitioned to the real estate world and has spent the last two years working for Barry Estates in San Diego, CA. As the highest volume firm in San Diego, itself one of the largest luxury home markets in the world, Hutton and his team sold $231 million dollars in residential real estate in 2018 and $249 million in 2019, consistently maintaining the firm’s standard of excellence that has led Wall Street Journal to rank them as the #1 Team in San Diego every year since 2008.

However, after 60 moves, Hutton’s ultimate goal has always been to return to the city that welcomed him and where he spent his formative years: Seattle. With longstanding ties to the region and a love of the Northwest kindled by his family’s history with the Mariners, Hutton is elated to be back where he belongs.

His personal philosophy and real estate practices are centered on empathy. His own personal background has shown him the emotional, financial, and personal stakes involved in buying a new home. Moving can be an exciting, nerve-wracking, or even difficult experience, and Hutton’s goal is to make the entire process seamless, easy, and joyous as it should be.

Hutton works out of the Madison Park office location, specializing in residential real estate in the greater Seattle and Bellevue areas. He works with first-time homebuyers, move-up buyers, executive relocations, and high net worth individuals to deliver results that always aim to exceed his client’s expectations. He lives in Kirkland with his wife, a longtime resident of the city, and their two-year-old daughter, Cameron, who loves to smile and make her parents laugh. He’s also active in local youth baseball organizations as a coach and an ardent believer in the sport and its power in young kids’ lives.