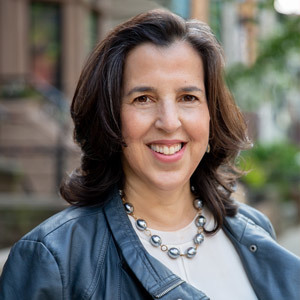 Maxine is involved with the Brooklyn Academy Of Music, the Prospect Park Alliance, and an animal rights activist.

Maxine loves Brooklyn. Although she’s traveled everywhere from Madrid to Hanoi, there is no other place on earth she prefers over Brooklyn. The park, the architecture, the streets, the shops, the restaurants, the coffee; all contribute to Maxine’s love of the borough. She met her husband in Brooklyn, got married and is now raising a family there, but what Maxine loves most is the stories that come out of the town.
As an Emmy Award-winning television producer National Geographic and public television, Maxine made a career of telling peoples' stories. Now, as an agent , she doesn’t just tell peoples' stories; she gets to be a part of them.
Enabling her clients' greatest hopes to become reality is what makes real estate the best career Maxine has known. This is demonstrated through connecting the retired 9/11 firefighter and his family to their dream ; guiding the nervous independent filmmaker through her first purchase, and helping the couple who had been in their beloved home 55 years finally sell and move on.
Having been in the top 2% of real estate professionals in the country and a consistent member of a Multi-Million Dollar Sales Club, Maxine is committed to her clients’ needs and, Maxine knows that real estate isn't just about a property; it's about home.