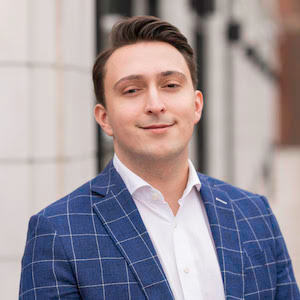 Michael Olshansky is the newest member of RM Luxury Group. He was born and raised in Ukrainian Village, where he was extremely active in the community in assisting with photographing events at the Ukrainian Institute of Modern Art, actively participating in PLAST; a Ukrainian Scouting Organization, acting in various cultural plays in the Ukrainian community, and so on. In his high school years, Michael attended Saint Ignatius College Prep, where he ultimately fell in love with Economics and competitive sailing. After high school, Michael went to college at Pace University in New York City, where he initially pursued an Economics degree, and then realized that the Arts were his passion. This dichotomy has led Michael to many experiences, such as working for Stella McCartney’s PR department, where his event planning and communication skills were put to the test, working at a startup in a tech incubator, which required him to wear many hats, and working summer jobs back in Chicago at The Lord Companies, a family real estate office. Michael quickly realized that a career in real estate would be the best option for him, as he would be able to exercise his wide range of talents.

Michael came back to Chicago late in 2016 to take care of family matters, and ultimately fell back in love with the city that raised him. After getting his license, Michael assisted an agent at @properties, ultimately to gain experience and re-familiarize himself with Chicago’s new real estate landscape. He also decided to take on some clients of his own, where he ended up helping an international client with a commercial deal, which prompted him to pivot into the commercial real estate sector where he was hired by JLL, where he managed 111 W. Jackson Boulevard.

After a year of managing 111 West Jackson, Michael felt creatively limited, which led him to re-set his sights and start a new path. He always wanted to learn more about the interior design industry, where he was an intern at Design Within Reach. Michael sharpened his design vernacular as well as 3D rendering skills, something that surely will be beneficial to his clients.

Michael joined RM Luxury Group / Compass at the end of 2019, and is excited to utilize his skillset to help buyers find & design their dream homes, and re-concept and market their current homes to get the highest returns.

In his free time, Michael enjoys being active with the Ukrainian Institute of Modern Art, where he’s eyeing a board seat. Michael also is active in the sailing community in Chicago, a member of the Chicago Yacht Club, and races as much as possible during the sailing season.