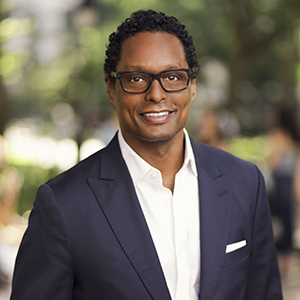 In 2009, after 15 years as a marketing executive, Simmons made the decision to join Elegran, an upstart luxury real estate firm as a real estate sales agent and quickly became a solid producer selling and leasing real estate to celebrities, luxury enthusiast and global executives. He moved to Town Real Estate in 2013 where he managed a complete sell out of The Morningside, a new condo development in Central Harlem and as leasing director of 220 Saint Nicholas Avenue. At Town, Simmons was twice named to the Town Elite, a group of the company's top sales producers who transacted in the top 15% of the firm. Now at , Simmons -founded the Simmons Smith Team with Chaka Smith to expand the teams market reach to include Brooklyn. Simmons, continues to represent a robust roster of luxury clients buying, selling and investing in New York City real estate.

In addition, Simmons served as Senior Vice President of Corporate Communications, Investor and Government Relations at 24/7 Media Inc., where he spearheaded the publicly traded company’s international communications team through seven mergers and acquisitions, and nine divestitures. Simmons led 24/7 Media’s privacy and technology best practices charge culminating in the signing of the Burns-Wyden Can-SPAM Act into law in 2003.

Simmons received a Bachelor of Science in Business Administration with a concentration in Marketing from the University of Arkansas at Fayetteville. He also completed additional courses towards a Masters in Communications at Baruch College, NYC.