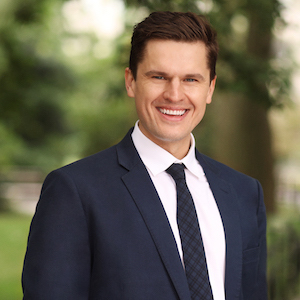 Buyer's Agent and Listing Agent
Fluent in English and Polish
Olgierd has a support team fluent in French, Spanish, Portuguese, and Arabic

Olgierd, originally from Legnica, Poland, has been in New York City for over 11 years. Currently residing on the Upper West Side of Manhattan on beautiful West End Avenue, Olgierd has also lived in Brooklyn and Queens and has traveled extensively throughout the city as a principal member of a touring theatre company focused on bringing the arts to underprivileged and disadvantaged audiences. Having been active across the five boroughs for over a decade, he knows New York very well.
Understanding that purchasing a home is the biggest financial investment in most people's lives, Olgierd represents sellers and buyers with undiminished enthusiasm and determination. He cares deeply about his work and prides himself on being able to find creative solutions to even the most complex situations. With a no-nonsense approach, he is a strong negotiator and a tenacious advocate for his clients.
An ambassador for the performing arts in the real estate market and a classically trained musician and dancer, Olgierd has performed on the stages of Wroclaw, London, and New York, and has worked with many prestigious communities including Columbia University, NYU Tisch School of the Arts, The American Academy of Dramatic Arts, The Juilliard School, The Kosciuszko Foundation, and Carnegie Hall.
Olgierd's short movie and first single "Leading Me Straight" has premiered at film festivals all over the world in 2019, and currently he's working on the modern adaptation of "Notes from Underground" by Fyodor Dostoevsky for the big screen. He brings the same artistic passion, discipline, and tireless devotion to the real estate world, offering a unique perspective to the bustling industry.