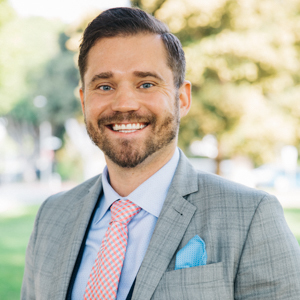 KMF is building an $18M spec home in Malibu hills

Nick Lachey and Vanessa Minnillo buy a new estate in Encino for $4.15 million

About
Sebastian Wolski has long cultivated an intense passion for real estate, which he now applies as a specialist in the high-end, development, and investment property markets. At the age of 21, Sebastian purchased his very first rental property and became Michigan’s youngest franchisee of a tanning salon franchise. Since then, he has applied his strong work ethic to pursue ever loftier goals, from his nationally recognized performance in sales to his love for extreme sports.

Sebastian continuously hones his nuanced understanding of the local real estate markets to deliver his clients with tailored, consultative service that regularly surpasses their expectations. He became the Managing Director of the Serhant Team at Nest Seekers International where he was featured numerous times on Bravo TV's Million Dollar Listings New York & Los Angeles alongside Ryan Serhant. In the team's first, Sebastian led the team to be the #1 Sales & Leasing Team at Nest Seekers International on the West Coast. After his success there, he was recruited and invited to join. Sebastian formed "The Sebastian Wolski Team" with his sights set on being the top team at & furthermore in California as of his pursuit of excellence in real estate sales. Sebastian and his teamwork not only work with Celebrities & Athletes but also specialize in luxury leases and first-time home buyers. His areas of focus include Beverly Hills, Santa Monica, Pacific Palisades, the West Side, Beverly Hills, Holmby Hills, Hollywood Hills, West Hollywood, Malibu, and DTLA.

Born in Poland, Sebastian moved to Michigan as a child and has lived in California since 2005. In addition to his comprehensive knowledge of the southern California market, he draws on an internationally informed background and can also identify the influences of a Midwestern upbringing: above all, reliability and long-term relationship building form the core of Sebastian’s personal values.

Following success in collegiate athletics and study in Finance and Computer Information Systems, Sebastian was selected as one of 7 out of 9,000 applicants to lead an automotive industry pilot program by Mercedes Benz Corporate and talent+. Sebastian quickly became one of the top Mercedes Benz Assistant Service Managers in the nation and was later recruited by Porsche, becoming one of the first World Porsche Brand Ambassadors. He's even dabbled in acting, earning a guest star role in a tv movie.

When Sebastian isn’t working on your behalf, he’s usually taking advantage of the great California weather, traveling to 20+ countries, mountain biking, snowboarding, running, rock climbing, or playing basketball. He is passionate about Porsche, world travel, acoustic guitar, and – his latest personal project – attaining his private pilot’s license. Sebastian’s energy and uncompromisingly high aims are reflected in both work and play: He has traveled throughout the world, skydiving bungee jumping, and climbing glaciers along the way.

As he takes on new challenges, Sebastian’s primary passion remains the same: to provide top-quality service to his clients while pushing himself to keep improving a lifelong track of dedication and excellence.
Spotlight 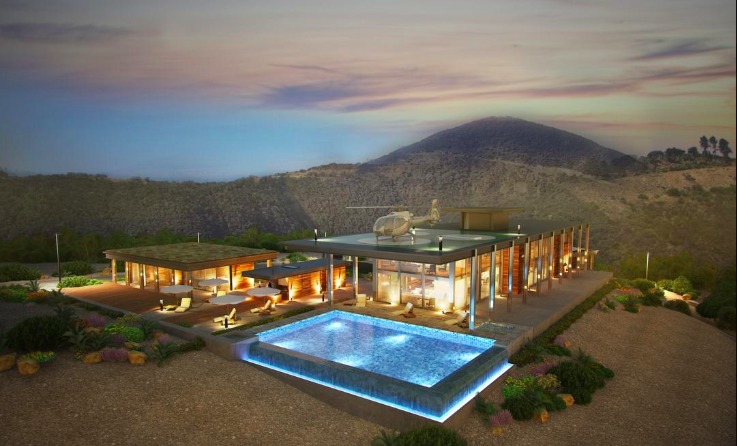 53 OCEANFRONT RESIDENCES ALONG THE BLUFFS OF PACIFIC PALISADES. New residential enclaves of this stature, along the California coast, are precious and few. One Coast takes full advantage of this extraordinary opportunity by creating spacious, thoughtful, luxurious residences as beautiful as their surroundings. Located on a bluff at the iconic intersection of Sunset Blvd. and PCH in Pacific Palisades, this limited collection of 53 townhomes and single-level flats will offer 2 bedrooms plus den 2,887 sq. ft. of living space up to 5 bedrooms and 5.5 baths 5,017 sq. ft. The community is also surrounded by the natural beauty of local beaches, canyons, mesas, mountains and parks in every direction. Live in harmony with the sea, in the beauty of your surroundings, in the way few others ever will. 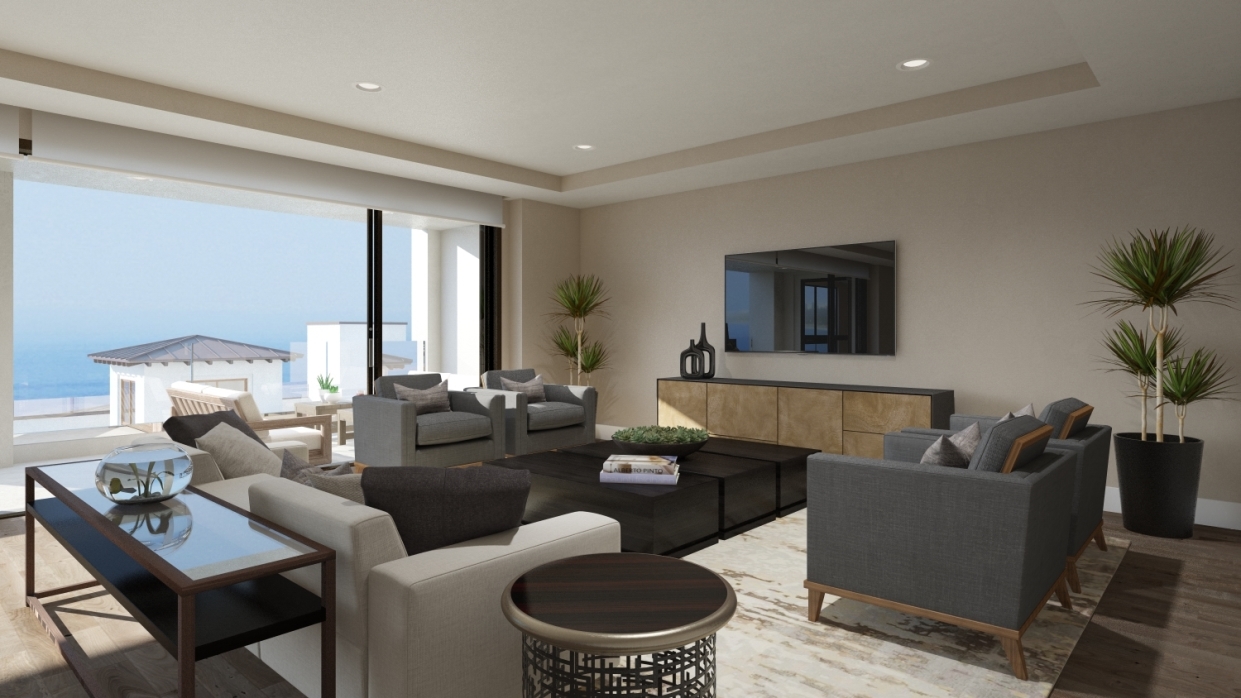 Tucked away in the Curson Place enclave, this impeccable Modern home is close to all of the action yet placed up in the private hillside. You’re Moments from Wattles Park, with views of the city and canyon. Incredibly constructed with attention to the smallest of details. Security and privacy–this home has it all–with 4 Bedrooms, 4.5 Bathrooms, plus an office! Featuring cutting edge design with wide plank rustic floors, walls of glass, and high-end finishes. Light fills in every room and inviting spaces including a loft-like living/screening room with fireplace, open dining room, separate office, and gourmet kitchen with Caesarstone counters and Miele appliances. All public rooms open to an oversized entertaining deck with canyon and city views. Sexy master suite features an additional built-in drop-down screen and surround sound, sleek bathroom, and large walk-in closet. This home is easy to maintain with very low maintenance. Located adjacent to Runyon Canyon and The Sunset Strip. 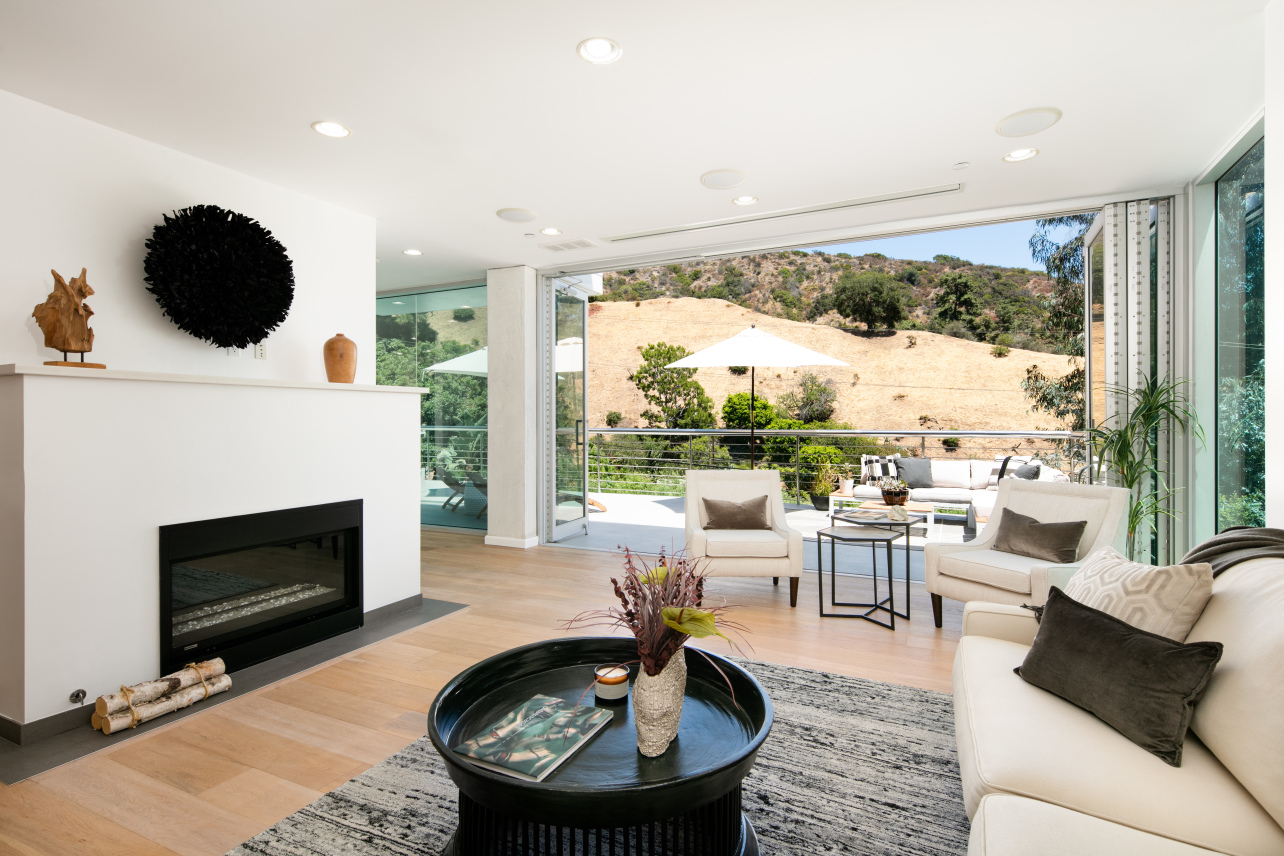