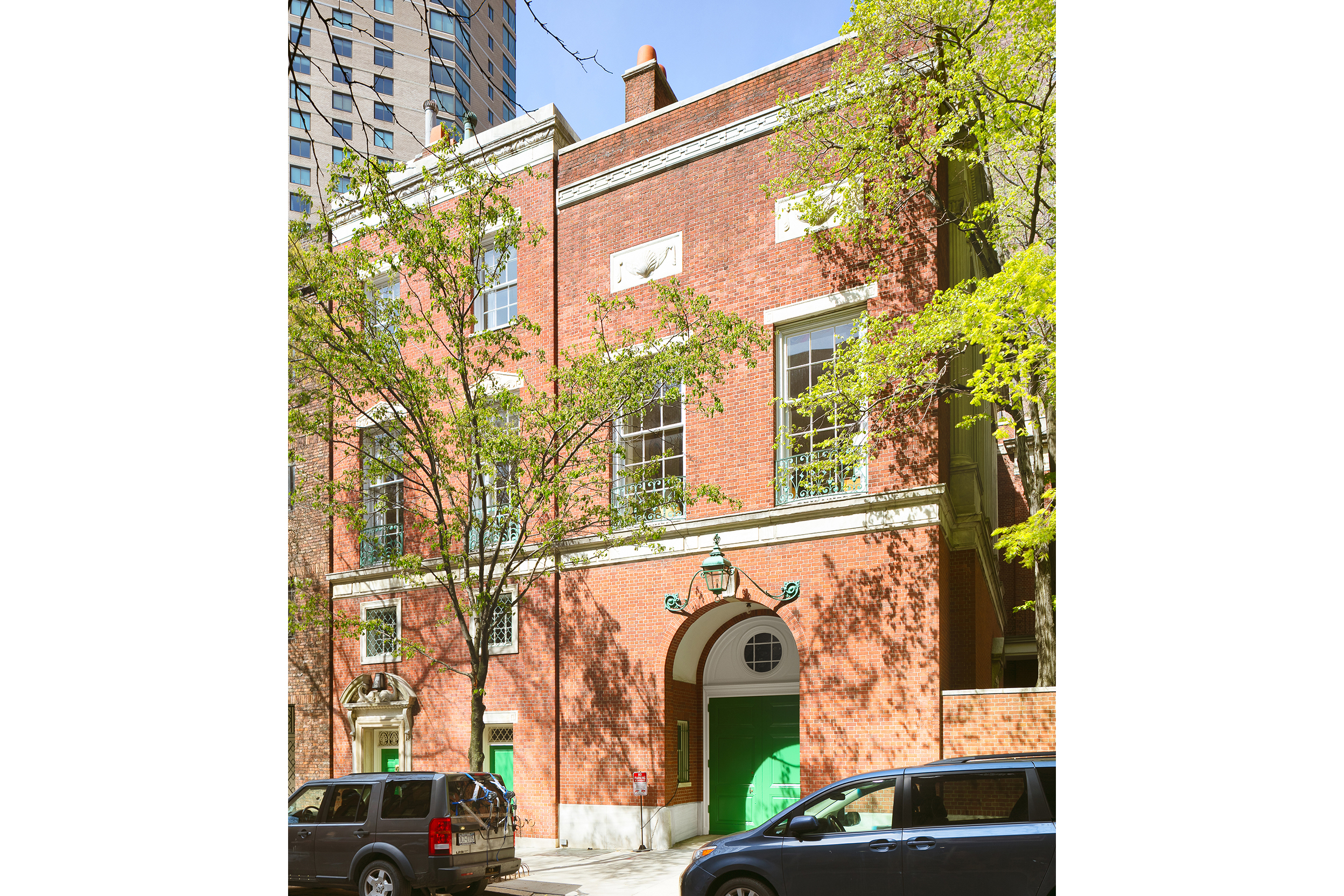 Offered for sale for the first time together are two sophisticated and landmarked townhouses designed by the renowned architectural firm of Delano & Aldrich, and once owned by prominent businessmen George F. Baker, Jr. (who built the houses in 1929 and 1931) and later by DLJ co-founder, Richard H. Jenrette, the noted preservationist.

Delano & Aldrich were the leading architects for New York’s elite during the first three decades of the 20th century, including the Rockefellers, Vanderbilts, Astors,

...Offered for sale for the first time together are two sophisticated and landmarked townhouses designed by the renowned architectural firm of Delano & Aldrich, and once owned by prominent businessmen George F. Baker, Jr. (who built the houses in 1929 and 1931) and later by DLJ co-founder, Richard H. Jenrette, the noted preservationist.

Delano & Aldrich were the leading architects for New York’s elite during the first three decades of the 20th century, including the Rockefellers, Vanderbilts, Astors, and Whitneys. Intact urban residences by the firm are exceedingly rare, many that survive having been converted to institutional use. Perfectly preserved, with spectacular proportions and original architectural details, fixtures and fittings, the houses include a double-height five-car parking garage - one of the largest private residential garages in the city - a majestic garden-facing classical colonnade, and elegant interior details like a stunning round staircase and an oval dining room.

67 and 69 East 93rd Street capture the essence of a timeless era and a gracious urban lifestyle. This is the rarest opportunity to purchase an important part of New York City’s architectural and social history - and yet, the houses together are as relevant and desirable to a twenty-first century buyer wanting the finest New York City residence, as they were to the original family that built them. With a remarkable 47-feet in width and approximately 12,000 square feet above grade, this is a once-in-a-lifetime chance to own one of the few remaining Delano & Aldrich residences in New York, and to create one of the largest and finest townhomes in the city.

Enter 67 East 93rd Street and arrive in the elegant formal entry hall, with 10.5-foot ceilings, a wood burning fireplace, original marble floors, and a seating area. Off this gracious entry are two elegant powder rooms, one with a small lounge. Through a barrel vaulted passageway, pass the original Otis elevator, beautifully clad in mahogany paneling with brass fittings, and arrive at the spectacular central stair hall. One of the most beautiful residential staircases in all Manhattan soars four stories up to a round skylight, bathing the center of the house in natural light, and from which a dramatically suspended lantern hangs down to the ground level. Further down the hall, is an extraordinary oval dining room grand enough for the largest of dinner parties, with decorative marble inlay floors, a handsome fireplace, three floor to ceiling casement windows, classical pilasters, and wall niches for sculpture. Adjacent is a large serving kitchen, tucked away behind the hall, and opposite a hidden door leads to the lower level. The cellar has an enormous kitchen, a breakfast room, laundry room, storage, mechanical rooms and a stair to the front service entrance.

The second floor, originally configured as staff rooms, is currently being used as a full floor library and office, and also has the original walk-in silver safe, and two full bathrooms.

Ascend the graceful curved stair to the third floor, and discover the most delightful entertaining spaces, boasting 12-foot ceilings and two grandly scaled parlor rooms, each with perfect proportions and enormous floor to ceiling windows. Both have wood-burning fireplaces, the front parlor with classical pilasters and the rear with a bowed 3-window bay. The floor is completed by an elegant windowed bar, a bath, as well as a huge central stair landing with French doors leading to a serene interior courtyard that connects to number 69. The fourth floor is home to two full width bedrooms, each with en-suite bathrooms and plentiful storage.

The street facade of 69 East 93rd is defined by an iconic arched portico with a distinctive wrought iron lantern hanging above. The curb cut leads to enormous apple-green double doors that swing open to reveal a vast, almost 1200 square-foot, double-height garage with parking for at least 5 vehicles. Alternatively, create a half basketball court and parking for 2-3 cars. Behind the garage is a huge room with a skylit extension that would make a perfect eat-in chef’s kitchen with a great family room, and could easily connect to the oval dining room and serving kitchen of 67.

The parlor floor of 69 East 93rd Street has a remarkable full-width corner living room, with 14.5-foot ceilings and an elaborately carved wood burning fireplace - this room could ideally connect to the front parlor of 67, for a most elegant and expansive suite of entertaining rooms. By opening the oversized windows and a small jib door, there is access to the colonnade, providing a unique view across the leafy courtyard to 75 East 93rd Street (another Delano & Aldrich masterpiece). The hallway has extraordinary eastern light and exposures through two more enormous windows opening to the colonnade. This floor also has a small dining room and kitchen, a den, office, bedroom, and a full bath. The top floor has a very large bedroom with a huge en-suite bath and dressing room.

The adjoining townhomes at 67 and 69 East 93rd Street are part of a complex that also included the neo-Federal corner mansion at 75 East 93rd, together known as the George F. Baker Jr. Houses. Number 75, originally known as the Francis Palmer House, was built by Delano & Aldrich in 1918 on the corner of Park Avenue, at the highest point in Manhattan, and purchased by Baker for his family in 1926. He then commissioned Delano & Aldrich to design and build a ballroom wing connected to a new structure at number 69 (completed in 1929) and a home for his father at number 67 (1931). Baker succeeded his father as President of the First National Bank of New York. The famed financier and philanthropist George F. Baker Sr. made his fortune in railroads and banking, was a close friend and business partner of J.P. Morgan, gave the founding grant for the construction of Harvard Business School, and was said to be the third richest citizen of the United States at his death in 1931 (after Henry Ford and John D. Rockefeller).

Moments from Central Park and a stone's throw from the world's most prestigious museums, the George F. Baker Houses sit on a prestigious block of East 93rd Street lined with grand Neoclassical homes, which also include the Spence School's Lower School in the former William Goadby Loew House, built by Walker & Gillette in 1931, and the Mrs. Graham Fair Vanderbilt House, completed by John Russell Pope for Virginia Fair Vanderbilt in 1930.

The Payment Calculator is for illustrative purposes only.

For completeness, Compass often displays two records for one sale: the MLS record and the public record.

School ratings and boundaries are provided by GreatSchools.org and Pitney Bowes. This information should only be used as a reference. Proximity or boundaries shown here are not a guarantee of enrollment. Please reach out to schools directly to verify all information and enrollment eligibility.

Homes for Sale near Upper East Side

No guarantee, warranty or representation of any kind is made regarding the completeness or accuracy of descriptions or measurements (including square footage measurements and property condition), such should be independently verified, and Compass expressly disclaims any liability in connection therewith. Photos may be virtually staged or digitally enhanced and may not reflect actual property conditions. No financial or legal advice provided. Equal Housing Opportunity.

This information is not verified for authenticity or accuracy and is not guaranteed and may not reflect all real estate activity in the market. ©2022 The Real Estate Board of New York, Inc., All rights reserved. The source of the displayed data is either the property owner or public record provided by non-governmental third parties. It is believed to be reliable but not guaranteed. This information is provided exclusively for consumers’ personal, non-commercial use. The data relating to real estate for sale on this website comes in part from the IDX Program of OneKey® MLS. Information Copyright 2022, OneKey® MLS. All data is deemed reliable but is not guaranteed accurate by Compass. See Terms of Service for additional restrictions. Compass · Tel: 212-913-9058 · New York, NY